Professional Wrestler and Hound Comics CEO Brimstone will be a speaker at LIPopCon 2015!

Brimstone is a professional wrestler, actor, author, philanthropist and comic book/animated hero. He has had a successful and rewarding career participating in and administering numerous entertainment careers spanning well over two decades. As the co-founder and CEO of Hound Comics, Inc., Brimstone and his team of creators launched his comic book series, “Brimstone and The Borderhounds” on October 31, 2010 at Borders Books and as of January 11, 2011 went nation and world wide via Barnes & Noble, Book World, and Amazon. Bridging the gap of wrestling star and the corporate world, Brimstone has an extensive background in marketing, advertising, management, and branding. At Newsday, under Times Mirror and the Long Island Voice, he worked in Senior Management. He created and directed one of the largest employment publications in the Tri-State Area, the Employment Journal, with distribution centers in Long Island, NYC, and NJ; and administered LI Career Fairs, Long Island’s top career fair company. Looking to train up and coming hopefuls in the art of professional wrestling, Brimstone launched Critical Mass Pro-Wrestling Corp, which was considered one of the biggest and best pro-wrestling training facilities in the North-East. Brimstone has also been a Head Trainer for Pro Wrestling Revolution and a guest trainer for FTW Wrestling and many other training facilities across the country.

To learn more about LIPopCon 2015’s other featured guests, check out our Featured Guests Page.

Want to promote your organization at LIPopCon 2015 this year? Then reserve ad space in the Official LIPopCon 2015 Brochure today! By reserving ad space, you will have the opportunity to connect with approximately 200 librarians, educators, and other professionals on Long Island and in the New York tri-state area at the conference, as well as hundreds of other Long Island librarians via electronic promotion.

Complimentary ad space in the LIPopCon brochure (a $100 value) is also included when you register for a table at the conference (so long as ad space remains available in the brochure).

$100 for a quarter page ad:
Each page is 8.5×11
Organizations will have to design their own ads to put in the brochure.

Please contact Barbara Grace at bgrace@gardencitypl.org for more information or to reserve a table or an ad at the conference.

Walter Hillegas of the Empire Saber Guild will be speaking at LIPopCon 2015! 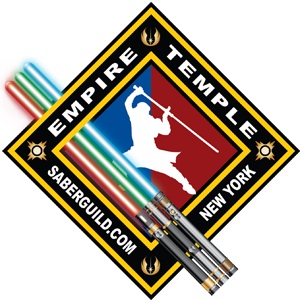 Empire Saber Guild is the New York Temple of Saber Guild, an international Star Wars lightsaber performance and costuming organization. The organization is a Lucasfilm-recognized, not-for-profit fan group who performs at fan conventions, charity events, sporting events and official Star Wars events around the world. Its members are choreographers, dancers, actors, artists, costumers, filmmakers and photographers, all who volunteer their time to share their love of Star Wars with the community. The organization’s focus is on lightsaber performance for stage and film.

For more information about the Empire Saber Guild, visit their website at http://www.empiresaberguild.com.

To learn more about our other featured guests, visit our Featured Guests Page!

Comic Book and Graphic Novel Scholar Caroline Fuchs will be a speaker at LIPopCon 2015!

Caroline Fuchs is an Associate Professor and Outreach Librarian at St. John’s University in New York. In addition to an M.L.S, she holds an M.A. in English and an M.A. in history. She is an active member of the library community. She is the Immediate Past President of the Greater New York Chapter of the Association of College and Research Libraries (ACRL/NY), the ACRL/NY Legislative Liaison, and the co-chair and founder of the ACRL/NY First Year Experience Discussion Group. Caroline Fuchs is a 2012 Vincentian Research Fellow at St. John’s University. In 2011 she was awarded the Writing Across the Curriculum Faculty Fellowship, and in 2009 she received the Center for Teaching and Learning Teaching with Technology Faculty Fellowship. At St. John’s, Caroline Fuchs created and teaches the Discover New York course “Exploring New York through Comics.”

For the St. John’s University’s research guide to graphic novels and graphic novels in education, which was created by Caroline Fuchs, please visit http://campusguides.stjohns.edu/content.php?pid=189225&sid=1588170.

Graphic Novel and Comic Art Scholar N. C. Christopher Couch will be a speaker at LIPopCon 2015!

N. C. Christopher Couch holds a Ph.D. in art history from Columbia University and is a professor at the University of Massachusetts Amherst. He is the author of numerous books and articles on Latin American art and on graphic novels and comic art, including The Will Eisner Companion: The Pioneering Spirit of the Father of the Graphic Novel (with Stephen Weiner), Will Eisner: A Retrospective (with Peter Myer), Faces of Eternity: Masks of the Pre-Columbian Americas, and The Festival Cycle of the Aztec Codex Borbonicus. He curated exhibitions at the W.E.B. Du Bois Library American Museum of Natural History, the Americas Society, the Oklahoma Air and Space Museum and the Smith College Museum of Art. He was senior editor at Kitchen Sink Press (Northampton), editor in chief at CPM Manga (New York), and has taught at Amherst, Columbia, Hampshire, Haverford, Smith and Mount Holyoke Colleges, and the School of Visual Arts. Publications he edited won or were nominated for 17 Eisner and Harvey Awards, and he has held fellowships at the Institute for Advanced Study, Dumbarton Oaks of Harvard University, and the Newberry Library. Current publications include the edited volume Conversations with Harvey Kurtzman, and a book on Batman artist and editorial cartoonist Jerry Robinson called Jerry Robinson: Ambassador of Comics.

Annie Stoll and Tim Ferrara, creators of the web comic Ode, will be speakers at LIPopCon 2015!

Annie Stoll is a freelance graphic designer for companies like Lucasfilm, an art director at Sony Music, and a comic illustrator. Annie Stoll creates comics and watercolor tutorials on her site, squidsalad.net. As a member of the Year 85 Group, she has also art directed a collaborative project called Hana Doki Kira, which is a shojo anthology with 26 different artists influenced by the shojo comic genre. Recently she was nominated for a Grammy in “Best Album Packaging” for her design work on the album Automatic Music Can be Fun.

Tim Ferrara is an independent writer and fantasy magic enthusiast. Tim Ferrara’s recent independent work can actually be found in Hana Doki Kira. He is also the creator of the webcomic Honey and the Whirlwind. Though Tim Ferrara has been known to illustrate his own comics, he is primarily a writer.

To learn more about Annie Stoll and her work, visit http://www.anniestoll.com/news/.

To learn more about Tim Ferrara and his work on Honey and the Whirlwind, visit http://www.honeyandthewhirlwind.com/.

Raina Telgemeier’s Sisters is named one of the Great Graphic Novels for Teens by YALSA on their 2015 list!

Raina Telgemeier will be the keynote speaker at LIPopCon on April 16, 2015.

For more information about Raina Telgemeier, visit our Featured Guests page at http://www.lipopcon.org/featured-guests/.

To register for the conference, visit http://www.lipopcon.org/registration/.

To check out the full list of Great Graphic Novels for Teens, visit http://www.ala.org/yalsa/2015-great-graphic-novels-teens.

Web Comic Creator Sophie Goldstein will be a speaker at LIPopCon 2015!

Sophie Goldstein is a 2013 graduate of the Center for Cartoon Studies.  In 2014 she won an Ignatz Award for her mini-comic, House of Women, Part I.  Her work has appeared in various publications including Best American Comics 2013, The Pitchfork Review, Maple Key Comics, Sleep of Reason, Symbolia, Trip 8 and Irene 3.

To learn more about Sophie Goldstein and her work, visit her website here: http://www.redinkradio.com/

Papercutz will be at LIPopCon 2015!

Papercutz is a graphic novel publisher of many popular kids graphic novels series, including Geronimo Stilton, Disney Fairies, and LEGO Ninjago. Papercutz will have a table at this year’s LIPopCon on Thursday, April 16, 2015. To learn more about Papercutz, visit their website here: www.papercutz.com.

Exhibitors can still reserve a table at LIPopCon 2015!

Want to promote your organization at LIPopCon 2015 this year? Then reserve a table today! By reserving a table, you will have the opportunity to connect with approximately 200 librarians, educators, and other professionals on Long Island and in the New York tri-state area.

Space is LIMITED, so reserve while you can!

For more information, check out our Exhibitors Page!