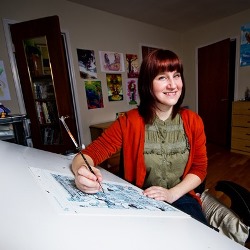 Faith Erin Hicks is a Canadian writer and artist. She worked in the animation industry for several years before transitioning into writing and drawing comics full time in 2008. She started making comics “for fun” and putting them on the web when she was in college.

She won an Eisner Award in 2014 for The Adventures of Superhero Girl.

Faith currently lives in Vancouver, BC with her partner, Tim, and their helpful cat. Her current project is The Nameless City, a three book series with First Second Books. The first Nameless City book will be out in April 2016.

Here’s a terrific interview she did with Rainbow Rowell about their upcoming work together.

Annie Stoll is a freelance graphic designer for companies like Lucasfilm, an art director at Sony Music, and a comic illustrator. Annie creates comics and watercolor tutorials on her site, squidsalad.net. She is also the co-creator of the web comic Ode, with Tim Ferrara. As a member of the Year 85 Group, she has also directed a collaborative project called Hana Doki Kira, which is a shojo anthology with 26 different artists influenced by the shojo comic genre. Recently she was nominated for a Grammy in Best Album Packaging for her design work on the album Automatic Music Can be Fun.

Caroline Fuchs is an Associate Professor and Outreach Librarian at St. John’s University in New York. In addition to an M.L.S, she holds an M.A. in English and an M.A. in history. She is the Immediate Past President of the Greater New York Chapter of the Association of College and Research Libraries (ACRL/NY), the ACRL/NY Legislative Liaison, and the co-chair and founder of the ACRL/NY First Year Experience Discussion Group. In 2011 she was awarded the Writing Across the Curriculum Faculty Fellowship, and in 2009 she received the Center for Teaching and Learning Teaching with Technology Faculty Fellowship. At St. John’s, Caroline created and teaches the Discover New York course “Exploring New York through Comics.”

N. C. Christopher Couch holds a Ph.D. in art history from Columbia University and is a professor at the University of Massachusetts Amherst. He is the author of numerous books and articles on Latin American art and on graphic novels and comic art, including The Will Eisner Companion: The Pioneering Spirit of the Father of the Graphic Novel (with Stephen Weiner), Will Eisner: A Retrospective (with Peter Myer), Faces of Eternity: Masks of the Pre-Columbian Americas, and The Festival Cycle of the Aztec Codex Borbonicus.